Gotham Gridiron, which covers the past present and future of New York football, has a new logo and a re-designed website, Gotham Sports Media’s Mark C. Healey announced on Jan. 15.

“It’s something we’ve wanted to do for a long time,” said Healey, who started Gotham Sports Media (GSM) back in 2005. “Gotham Baseball has carved out a nice little spot in the New York sports landscape, and it’s time we do the same for the other sports.”

“New York City’s sports history is a rich one. Too often, the majority of sports coverage in this town is focused on the here and now, and increasingly on what happens next, especially when it comes to Fantasy Sports,” said Healey.  “What’s often been lacking is the historical perspective.”

Like Gotham Baseball, which made its return to print in 2017 via The Wave newspaper in Rockaway Beach, NY, Gotham Gridiron will also run on a periodical basis in the 128-year old local newspaper, starting with the Jan. 15, 2021 edition.

“The Wave’s publisher, Walter Sanchez, has been very supportive of the Gotham platform,” said Healey, who has been with the paper since 2014. “Having the relationship between print and digital has been great for Gotham Baseball, and I am sure it will do the same for Gotham Gridiron.”

The logo, designed by Paula DiGioia, was specifically created for the newspaper column.

“Mark came over to my desk with a paper plate,” said DiGioia. “He had sketched the Gotham Gridiron logo concept on it. I laughed at first but then took a closer look and thought, ‘wow this is on point.’ I believe it only took us 3 or 4 rounds of revisions to achieve the vision for the logo and that’s quick for a branding turn-around. It was a great collaboration and I’m thrilled with the final artwork!”

Healey said enjoyed the end result so much, he decided to incorporate its design into the website.

“I wanted the logo to embrace the Gotham branding of ‘past, present and future,” said Healey. “I’ve always loved the look of the New York Titans (now the New York Jets). Most people don’t remember that Titans were a snarky aside to the NY Football Giants back then, just like the AFL was to The NFL, so what better way to brand Gotham Gridiron? Mixing the Giants blue and Jets (ironically) “Gotham Green” infuses the present, while the silver border and modern font emphasizes the future.”

For now, the focus will be on content creation, but there are plans for new podcasts, and as well as plenty of Fantasy and draft analysis.

“This is just the beginning of this re-launch for GSM,” said Healey. ” We will be rolling out Gotham Hockey and Gotham Hoops in the next few months as well. It’s going to be a lot of hard work, but I’m excited about the process.”

“New York sports coverage is in good hands with the renowned Mark Healey, whose tempered wisdom compliments the passion of his followers. These sites are an important part of our shared sports landscape.” Marty Appel, author of Casey Stengel, Pinstripe Empire and Munson and former Yankees PR Director and TV producer.

“Since 2005, Gotham Sports Media has been instrumental in bringing current — and especially past — histories for all of New York sports, to readers across New York, the US and the world. Mark Healey, whom I’ve known for years, has been instrumental in delving into uniform and logo histories for many of the more obscure and/or forgotten teams who have called New York home, and has been a boon to researchers and historians of New York Sports. The new logo for Gotham Gridiron beautifully harkens back to a simpler time, when you could watch the Brooklyn Dodgers square off against the New York Yankees, not on just a baseball diamond, but on the gridiron. As Deputy Editor of Uni Watch, I want to congratulate Gotham Sports Media for their consistently excellent coverage of New York sports — past, present and future — and to encourage anyone with a yen for uniform and logo histories, to make GSM a part of their daily reading.” Phil Hecken, Deputy Editor, Uni Watch.

“New York’s football history is rich and fascinating—Bulldogs, Stars, Stapletons, and Titans once roamed Gotham’s gridirons. Mark Healey curates and conveys these stories with knowledge, passion, and a commitment to journalistic excellence, along with a dash of New York attitude.”
Todd Radom, President, Todd Radom Design.

About Mark C. Healey: Mark has been an editor, writer, and broadcaster since 1996 for a variety of media outlets.  Currently, he is the Editor In Chief of The Wave newspaper in Rockaway Beach, NY. He is also the founding editor of Gotham Baseball magazine, served as the first-ever Online Editor for Baseball Digest magazine (Dec 2009 – Feb. 2012). Mark also worked at the Associated Press from 1998-2006. He has been a guest analyst on dozens of national and local sports programs. 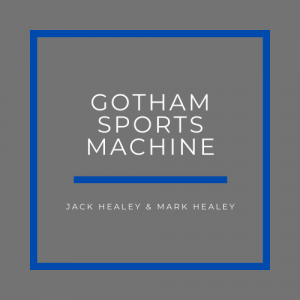