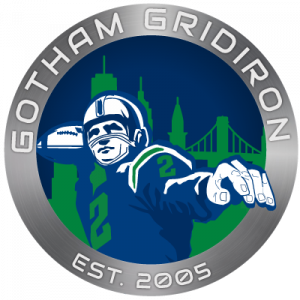 Back in 2005, the folks who brought you Gotham Baseball created platforms for all of New York sports, including a website and podcast (before they were called podcasts) for Gotham Gridiron.

We felt, and still do, that New York sports fans needed a more curated approach to sports journalism.

New York City’s football history is a rich one. Too often, the majority of football coverage in this town is focused on the here and now, and increasingly on what happens next, especially when it comes to Fantasy Football.

What’s often been lacking is the historical perspective, especially when so many forget that from the Polo Grounds to Shea Stadium and to the Meadowlands, some of the greatest football players, coaches, and teams have called Gotham home.

Our hope is to provide football coverage that is accurate, comprehensive, and most of all, fun.

For instance, did you know that at one time or another, every one of NYC’s five boroughs hosted a pro football team?

In Manhattan’s Polo Grounds, both the Giants and the Titans of New York, now the Jets, played games there. So did the New York Yankees football team, which also played games in The Bronx at Yankee Stadium.

In Queens, the Jets called Shea Stadium home, and even Staten Island had a pro football team at one point, the Staten Island Stapletons. The Stapletons were an early NFL team from 1929-1932, playing its games at Thompson Stadium, which was torn down in the 1950s.

We’ll tell those stories, we’ll keep you updated on the latest news as well as providing fantasy football analysis from some of the best in the industry.